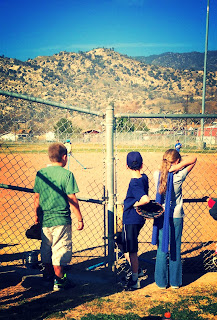 Will had little league tryouts yesterday. He did awesome for not ever having played before. It was simple: three pitches with the machine, three grounders, and three pop flys. He'll be playing with the pitching machine...can't wait to watch his progress!

I hope they sell hotdogs at the games.
Posted by Karrie at 4:38 PM No comments:

I just had a crazy idea. Like, one of those ideas that gets you all excited, but requires effort, but could be fun...and so you start with step one and two, and remember you had this idea before, but never carried it out because of all the negative thoughts in your head...

And, cue the big deep breath and take a chill pill.

I will consult my inner circle and give it some time. Then, if it's not totally whacked out, I will share.

And, since I'm pretty sure I wrote a book, I need a platform from which to sell it. And since I kind of started a music curriculum, that needs a platform, too. Crazy, right?
Posted by Karrie at 1:59 PM No comments:

It's been a whole month since I've visited my own blog. No surprise there, right?

Been up to: stuff. Normal, everyday, stuff. Most days end with, "What exactly did I accomplish today?" thoughts. Most days start with, "Here we go again!"

I did get a pantry. It's pretty awesome to have storage space for food. Now I feel like I need to stock it all up though.

I went to Costco and spent WAY too much money. I have have large amounts of ketchup, mustard, and chocolate chips in my pantry! You know, the "essentials."

I keep not buying bread products, telling myself that I'll make them all. And, it'll be wonderful. Instead, I end up throwing whatever I can find into the kids lunches, or telling them "we don't need bread." When, in fact, "we" do.

I have been writing. I think I wrote a book. Whether it's any good or not, I have no idea. A couple of parts make me crack-up, which I realize is sad. I literally crack myself up, and I usually do this over things other people around me don't find humorous. I'm going to send it to my editor shortly. "Editor?" you say? Yes. My cousin has a Master's in English or something, and I only dabble in the stuff. So, after I red-ink it up myself, she said she would proof-read it and mark it up for me. Because I need help.

Today I have a fever. Mild, but a fever and sinus thing nonetheless. I don't feel awesome.

Good news: Jessie may NOT have to have more tubes put in her ears. She responded to medication slightly this last ear infection. It's only been like 8 months or something since she had them in last, and they are already out. Because of her age and because they got slightly better, Dr. said we could wait a month to see. Bad part: three days later she came up to me in her classroom and said her ear popped and it hurt. :( She likely had a burst eardrum again, but I won't know because even if she did, there is nothing a Dr. can do about it. So I gave her meds at home, and her pain wasn't severe anyway.

I want a gun. I also want a car. I could say I NEED BOTH. Like, I "need" to be able to protect myself when I'm out and about in the wilderness taking walks with Pearl. And, my car is SO UNCOMFORTABLE it is ridiculous. Still driving the Mazda. I kind of pride myself on driving a car that is almost 6 years old and currently has 174,000 on it. Maybe I'll just clean it really well and try to get the foot smell out of it. And, I'll get new back hatch struts so I can access the back easier. Still...and Expedition would be lovely. Too bad I don't have $30,000 to go buy one. A new one costs much more than that, but I kind of refuse to pay full price for a car. I did for the Mazda, and it's been great for what it is. I put every mile on this thing. But, I don't feel comfortable taking it farther than the big city. And my butt protests that far, because it was made for short trips. I just need to find 30 grand somewhere.

Maybe I can sell the book I wrote! That would do it. I wonder if I could sell enough copies over the next year to do that? That would be awesome.

Ryan got his transfer to Mojave. He's super excited. The kids are plugging away at school, and they are enjoying it. All of them. This is a good thing.

I am thinking about taking up running again, like I did once upon a time. But, I was reading a bunch of my old Facebook posts, and apparently I think about running often. But I never actually do it. There are common threads in my life: kid funnies, kid frustrations, cookies, peanut butter, and how I should exercise. Hey- at least I'm consistent. I guess.

I'm going to go take a nap now. It's almost 9am. I think I'll stick all my blankets in the dryer and warm them up first. That sounds cozy!
Posted by Karrie at 8:49 AM No comments: